“Fear= False Expectations Appearing Real.” –Langa township tour guide. Fear has guided some of my journey so far but these words added some perspective for me so I thought I’d share.

Week 5 brought a thorough lesson in apartheid, two sunrise hikes with no sunrise, and a difficult goodbye to a city that became a home.

I want to structure this week as a more free form journal because I unintentionally pieced together a story this week between each days’ activities.

On Monday, I walked to the District 6 Museum, a gutted and remade Methodist church that honors the members of the District 6 community that were forced out of their homes during apartheid. The church was covered in pictures, writings, and memories from the 60,000 people that were displaced. I paid for the guided tour and it was so worth it; this is a snapshot from our guide:

“On February 11th, 1966, they declared District Six a ‘white only zone’. I lived on Constitution Street in a large complex with my 11 siblings. My mother resisted leaving the house as long as she could. They made it really hard, shutting off the power and the water. We would hear bulldozers outside all day. On a summer day in 1981, we had a loud bang at the door. The police told us we had to move out that day. My mom who did not want to leave, hadn’t packed any of our stuff. The officers gathered it all up and brought it to our new home in an area outside the city that we did not even knew existed. I was not living in the house at the time, but went to visit a few days after to see the new space. Upon arrival, I was told that my mother had died of heart failure; we all knew she died because of a broken heart…it has been many years, but I have forgiven. That does not mean however that the memories and scars do not remain.”

As the rest of the museum showed, her story was not unique. The guide also informed us that there was a time during 1960s-1980s where everyone was required to carry around an ID. Black and colored people carried a ‘dompas’ which identified their exact race and restricted them to the township they were assigned. If you were caught in a different area, you would be put in jail. At any point, if you were caught speaking out against the government, you would be put in jail. There were also places labeled as ‘whites only’ and specific seats on the bus for black and colored people. Sound familiar?

Side note: the District 6 museum reminded me a lot of the West End museum in Boston. The West End was also forcibly gutted of all its residents, some of whom were my family, and torn down. One difference I noted is that the West End was rebuilt to be a neighborhood and apartments again. District 6 was torn down and is only now seeing spurts of residences. They did add an Institute of Technology and from what I saw a lot of high end coffee shops.

Back to the topic at hand, where did all these 60,000+ people go? The government built minimal homes on the outskirts of the city and sent them all there. As the guide mentioned many times, most of them had never been out there. They called these areas townships.

On Thursday, I visited the first township, named Langa. I tried rallying a group but it ended up being one other Remote, myself, and a tour guide who was born, raised, and lived in Langa. The guide, Mike, was in his mid-40s, so when Mandela was elected, he was 21ish (for context). He had an amazing outlook on the tour, he said “This is not a poverty. I don’t sell poverty, I sell aspiration”. He emphasized that with the cost, we would support his and eight other local businesses. The tour was the most important thing I did while in Cape Town. The company is called Ubizo Events and Tours, highly recommend.

We kicked off the tour in the restaurant Msanzi, owned and operated by the guide’s friend. Langa is 3 square km and it felt like we walked all of it. Mike guided us first to a fenced in grass area where he gestured to the area all boys go to 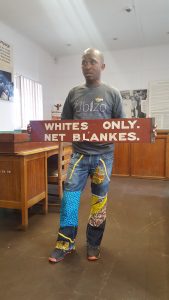 Views in the dompas museum

become men. It’s a tradition that still occurs when a boy turns 18 in which they send him to this area for a few days, circumcise him, and teach him how to act like a man. We then walked along a street lined with graffiti from a recent art competition and to the sport field. Mike continuously emphasized art and sports’ role in unifying people during times of hate. I too appreciate the power of the two, and it was fun to talk about the World Cup coming to South Africa, an event Mike thought helped the community.

As one does in Langa, we walked up to someone’s home that was advertising the sale of fresh ginger beer. For 5 Rand each, we got repurposed water bottles filled with homemade ginger beer. It was delicious and also hilarious that we went right into her house. Similarly thereafter we stopped at a repainted shipping container where for 1 Rand, you could get an igwinya, a small puffed donut-like thing. Nourished, Mike walked us through the neighborhoods, pointing out the graffiti in every corner.

It’s hard to describe the area, the houses ranged from small but modern to metal shacks, no real grass, trash all over the ground, but the graffiti added vibrancy and character that made it beautiful. Mike informed us that when people are running for office in South Africa, housing is one of the areas politicians like to target for votes. Pre-election, they give money for better housing to be built in the townships and then post-election, they fail to finish out the project. The result is neighborhoods with a wide spectrum of development. At one point, we walked into what they called a hostel that was basically a concrete living room/kitchen with six rooms coming off of it. Each (very small) room housed three people and kept all of their belongings. Again, we walked into a woman’s living space to see for ourselves. She was there and I felt slightly weird. But anyway, directly next door in a building that looked the same, we walked into another home that looked like an apartment we would have, more decorated and homey feeling. Such a wild juxtaposition. We also walked through a narrow alley of metal, cramped houses all side by side that had electric wires strung everywhere, definitely not safely. Important to note, though, that the living conditions are not a reflection of the people. The people are human, they had their traditions, their joy, careers in the city. And for someone who has never seen a place like I live, this is what they know. 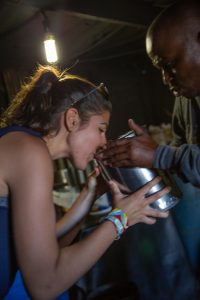 Other stops on tour (in order):

I say that this was the most important thing I did because it was more of an accurate representation of life in Cape Town than the beaches, mountains, and animals. 80% of the city’s population is black or colored and most of them live in townships like Langa. Mike acknowledged the appreciation for our taking the time to visit but also sort of shamed us for not doing it sooner and helping to support the local economy instead of just the tourist attractions. On a personal note, he said he steers clear of businesses that do not treat their employees well. “I want to support places where the employees’ children will be advocates in the future, not fall into the same poverty and struggle as their parents”. May this experience be a lesson for me for how I approach the next 11 months.

Furthering my education, a fellow Remote was able to coordinate a visit on Friday with one of Nelson Mandela’s prison guards, Christo Brand. Mr. Brand worked at Robben Island and one other prison, then later worked for Mandela in parliament. It was fascinating to hear him tell stories about the friendship that grew between them despite Brand being in a position of power from his role and race. He described prisoners as ‘just normal humans’ who were fighting for justice. Brand accredited his lack of hate towards blacks and coloreds to his childhood on a farm with black workers. I wanted to dig deeper on how Brando truly felt about the big picture, and the idea that these political prisoners were there for nothing, but he only skimmed the surface. Nonetheless, it was cool to tie together the Robben Island story in my head, now hearing from a political prisoner and a prison guard. Brand published a book called Mandela: My Prisoner, My Friend.

I still have so many questions unanswered about apartheid, about the political dynamic now between blacks and whites, and about the steps needed for creating a better future. How did apartheid all start? Who were other key players? How many whites today still hold as much hate for other races? And how long will it take to phase out, if at all? What is going to fix the 27.5% unemployment rate in South Africa? However, I am grateful that I got a better sense of it this week. 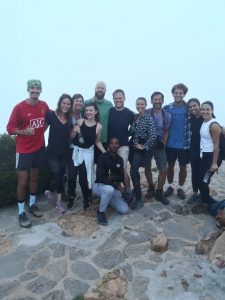 Look at that cloud backdrop, though

Cape Town was easily the best big foreign city I have visited. It had my two favorite things: mountains and water, and so much more. I loved the weather, the people, the hiking, and the history. I will for sure go back and am bringing EVERYONE with me!! I still can’t believe how hard it was to leave.

Welp, guess this is how the year will go. Here’s to hoping the rest is just as good (maybe minus the broken vertebra)!