You know what I realized this week? Working 20 hours a week (what I was doing) versus working 30 hours a week (now doing) is a lot different! How did I work 40 before?! Definitely been more work oriented this week, and I’m ok with it! For those wondering, I took on a contracted role with a healthcare technology company that developed software for facilitating the ordering process of DME (durable medical equipment) from hospitals to suppliers. The hope’s that the patient gets what they need faster and the supplier doesn’t get penalized when audited for having incomplete order forms. Been a change of pace for sure, but I’m enjoying it so far!

Things I’ve learned on Remote Year (just a few to kick off): 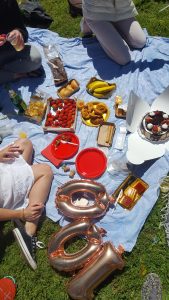 I am continuing to take time for myself and in turn, am learning a lot about my needs to function at my best. On that subject, this week I learned that the only pressure to do things and cram everything in is pressure I put on myself. At the end of the day, if I don’t have energy to be present in an event, I won’t enjoy it.

But seriously, still loving the journey and grateful for the people that continue to support me here and at home!