Konnichiwa from Kyoto! One week down in Japan, and it’s been great. Tried ramen for the first time because what better place to do it and seen more brown/white temples in this week than I have in my life (which I guess isn’t saying too much but ya, a lot of temples). Japan is efficient, organized, and structured, and I appreciate it very much. 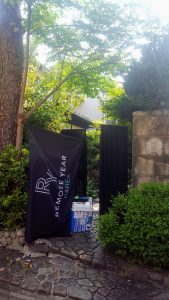 Entrance to the guest house

I am also LOVING my 9 bedroom tea house and bike situation. We have 10 people living together in a former guest house, equipped with an authentic tea room, two kitchens, six toilets, and the thing that will make this whole month more interesting: thin paper walls. My giant room is has two walls of sliding doors that are *mostly* opaque and tatami mat floors. We all get bikes as the house is a bit out of the city center, and we are blessed with cicadas that pierce your ears starting at 6am. The house is in a quiet neighborhood close to very little but a creek and a grocery store. It’s a pleasant twenty minute ride to the workspace. 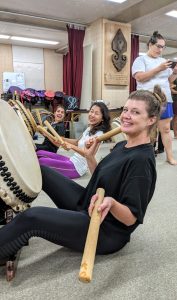 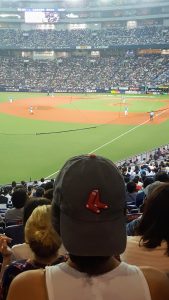 You can take the girl out of Boston, can’t take the Boston out of the girl

The hardest part of this week and month is the time difference between here and the East Coast. 13 hours doesn’t lend itself easily to overlapping meetings in NYC. Still trying to get a routine down work wise and well-being wise but otherwise, LOVE Japan. Excited to see what the rest of the month brings! And excited for a special visitor to join me next week 