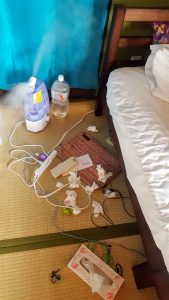 View of the week

This week my body was like “you’re not gonna give me enough rest? Ok, then let me run you over with a truck and make you stay down until you do”. Ya, for five days straight I was in bed, surrounded by tissues, humidifier cranked, and coughing up my intestines. This is Remote Year too, right? Day 6 I finally decided to go to the doctor for some antibiotics. Feeling a bit better now, but work in progress. On the VERY bright side, my dad, the famous Rich Frongillo, IS IN THE HOUSE!!

Other than my sinuses still being clogged, I’m feeling good. Gonna be a busy week of exploring and oh by the way, we are expecting a typhoon.