Finally got out of the cities this week, and MAN it was worth it. Really special time with Coach Rich, walking, talking, meeting cool people, and laughing.

If I were to sum up my thoughts on Japan it’d be like this. I appreciated the cleanliness, the efficiency, and structure, but sometimes it was too much. I got ‘tsk tsk’-ed many times for eating and drinking in places I was not supposed to and for walking in places I should not. But c’mon, lighten up a bit, we will live if I open this bag of chips in the store. I loved that Japan has its own vibe, Tokyo was maybe the most unique city I’ve ever been to, but anime culture is not really for me long term. I was not a fan of the culture for women of either being domesticated or taking the opposite extreme, not marrying and leading an entirely independent life. I think there needs to be more of a balance, but really just a culture shift that makes it ok for women to be both a housewife and a successful worker, or anything in between. I would never really fit in for the sheer fact that dresses and skirts are not my daily style as they are here.

On a personal note, I also found it really hard to eat because gluten free options are sparse. Ramen, udon, and soba noodles all have wheat flour in them. Sushi is gluten free but is almost always covered in soy sauce. On top of that, the lack of English in the supermarket makes it really hard to interpret ingredients. My dad and I cooked at the house or had Indian food because that was seemingly safe. One of my friends brought up that the homogenous society (98% Japanese) allows them to categorically cater to one diet. Japanese tend to have sensitivities to dairy, hence it’s found almost nowhere. With the exception of ice cream of course. 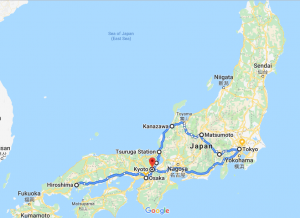 Our route around the country

I was really impressed by the lack of animosity towards the United States for our actions during World War II. Perhaps it was out of guilt for their actions as well, but the overwhelming emphasis on peace for the future was impressive.

If I had advice for people travelling to Japan in the summer, it’d be to get up and do things early. Things start to get packed around 10am and of course, the heat gets worse. I’d also highly recommend getting out of the cities. Definitely see Kyoto and Tokyo, but some of the beauty is outside.

Overall a good month and I really did get to see a lot of the country. One thing’s for sure, I loved the mountainous country side, and taking trains freely was a lot of fun.