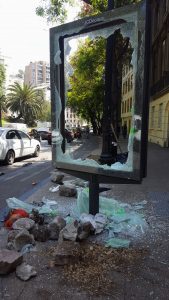 The remnants of protests

You know the expression ‘not all sunshine and rainbows’? Well coming off last weekend to what I arrived to, it could not be truer. Upon landing from Easter Island, we were greeted by the ghost town of Santiago on curfew. The streets were empty. You’d be arrested if you were out. We got stopped by the army and had to use our boarding passes as an excuse to be on the road. Every street sign was smash, poles down, cement blocks in crumbles in the middle of the road.

What had been going on? A protest that started on Friday over a raise in metro fares (since reversed) turned into a protest over all the political unrest regarding poor pensions and a large wage gap. The first days were full of burning busses and supermarkets. The army then stepped in and had been using tear gas and pepper spray to disperse crowds. City wide curfew had been from 7/8pm- 6am every night. A state of emergency was declared on Saturday. The protests continued through to Monday’s national march and Wednesday and Thursday’s official gatherings. During the week, it seemed to me like mostly students marching. However, our workspace and most stores were closed.

What has caused this level of uproar? In short, years of inequality and feelings of being violated. When arriving in Chile, we were told about their boosting economy in comparison to other South American countries. In the details however, that wealth is not distributed evenly. 50% of the working force makes less than $550 USD per month, and only the top 20% of earners make more than $1,000 USD a month. People feel robbed of things like public education, public health, student debt, and pensions. And of course, the lawmakers are the wealthiest and have corrupted the system. 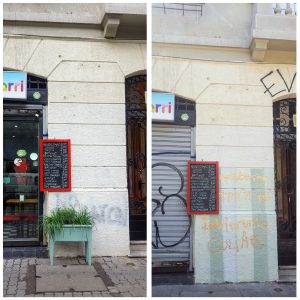 The protests were sparked by a raise in metro fares. As I said, that was resolved a few days after, so why did that not stop everything? All of the issues have reached a boiling point. Low wages are made worse by the still expensive cost of transportation. The fight for a better pension system and more livable salary continues… 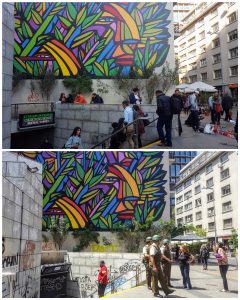 Looks a little different after a week

How did this affect us Pareans? Our mansion was in the center city, so the marching went right down the main street we live on. As I originally wrote this, I heard banging, honking, screaming, and the occasional tear gas bomb outside. While I was away, some people had a really hard time breathing in the apartments. BUT Remote Year was very supportive through it all, offering other workspaces, new accommodations, and delivering us groceries.

My protest experience went like this. After seeing the torn apart city, I stayed up late with mansion-mates discussing their experiences the past few days and plans for next steps. I was very close to buying a flight to Buenos Aires but decided to experience it for myself before making any decisions.

The next morning felt almost normal, except that everything was closed. We went to another Remote’s apartment to collect food that had been brought from another neighborhood. I took a spin around and soaked in all that had changed since I had left on Friday. Just shattered glass everywhere. By noon, as I reentered the mansion, the march had begun down my street. From 12 until around 8pm, all you could hear was *tum tum, tum tum tum* and the occasional *boom*

Most alarming to me was what happened around 7 when city-wide curfew started. The army came rolling down the street to clear people out. Out one window, I watched a group of guys set a huge pile of trash on fire on the corner to our street. Out the other window, I watched a group of guys throw tear gas bombs down the street and watch them explode. Out the other window, I watched a huge crowd of other protesters yelling and watching. Remote Year got us masks to wear in the house and protect from what was seeping in through our windows. And thissss is when I bought a flight to Lima (that was later covered by insurance!). Remote Year offered us a flight on Friday, I opted for one on Wednesday, knowing that they could set up accommodations and workspace for me right away. Seriously, blown away with all they did. 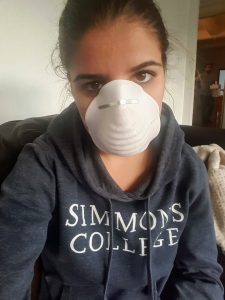 Let me be clear, the protest situation in Santiago was an inconvenience, not a threat to my immediate safety, or something I have to live through the repercussions of. Yes, I was terrified and yes, there was no way to predict how much it would escalate, but I have no stakes in the outcome and I was not marching outside. I admire and support the people of Chile in their fight. It was powerful to witness. And I use past tense, but the protests are still going as I write. I look forward to following along and hope it does not get worse. I should reiterate that the protests themselves were fairly peaceful and citizens not too violent, it only got a bit freaky when the army came through. It also goes without saying that, the protests do not make me think less of Chile. I had an amazing few weeks and hope to be back someday! The decision to leave was strictly for my mental health and productivity at work.

Anyway, flight out was Wednesday at 3pm, but Val and I decided to get to the airport extra early around 8am. The road near the mansion was usually blocked and traffic unpredictable so here we were, working at an airport café until our flight. Because it all seemed too smooth, we were delayed an hour for technical issues. Nonetheless, we landed to fresh air and a prearranged ride to our place in Lima for the week. Lima was our next destination anyway, we just landed a week early. Now we get to overlap with another Remote Year group.

My welcome present on the first full day in Peru?  An earthquake, 4.4 in magnitude (small), off the coast of Lima. Never a dull moment. My first ever! Annnnd on top of it all, my brother had hip surgery on Wednesday. Sending him all the best healing vibes!!

I am now writing from the Comunal workspace in Lima with a little more calmness about me. This week was definitely a lesson in fear. Overall, I feel an overwhelming sense of privilege to: 1) be able to get out of Santiago as I did and 2) not struggle with the same levels of inequalities that Chileans do. Very privileged to do what I do, travelling all over, and very privileged to be American, as much as I don’t agree with our politics all the time.

Well anyway, here’s to a long month in Peru!

Some footage from outside my apartment this past week: